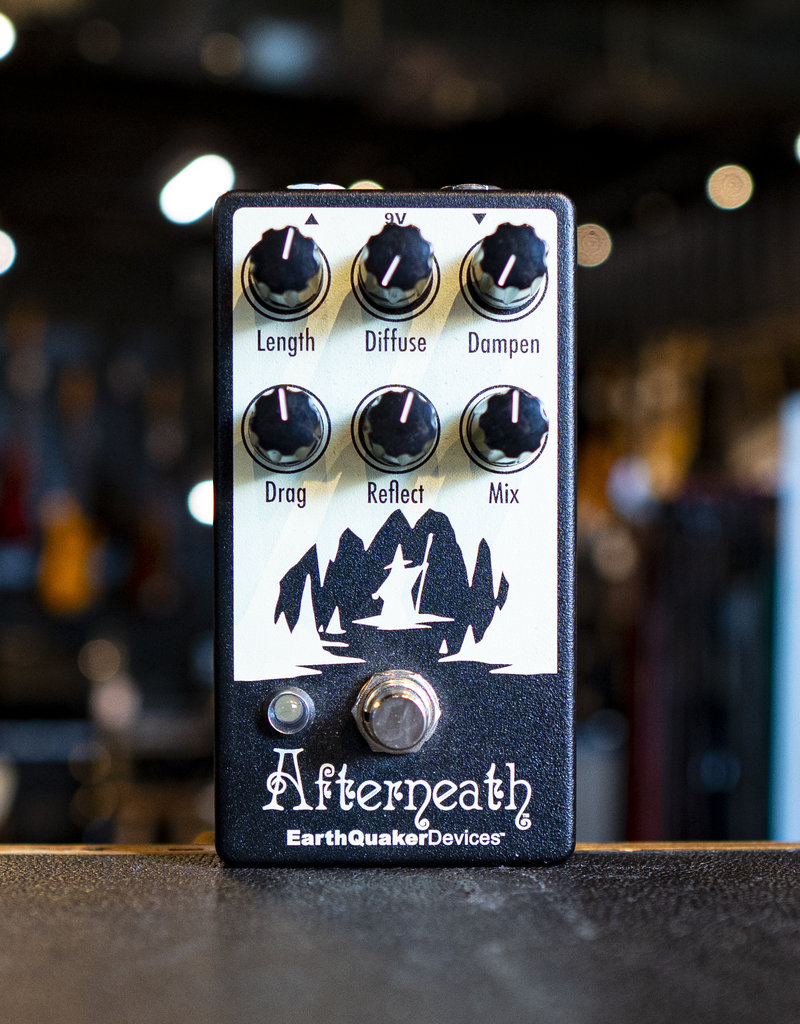 With an upgraded silent switching system, version 2 of the EarthQuaker Devices Afterneath reverb pedal is better than ever. Go far beyond traditional reverb effects with the Afterneath v2. It generates a swarm of short delays to create washes of ambience. Minimal settings allow you to create room and hall reverb effects, while more extreme settings border on self oscillation, without actually drowning out your dry signal. Speaking of which, the Afterneath v2 pedal uses digital processing for the reverb while leaving your dry signal path completely analog. If you're the type of guitarist who wants otherworldly tones from your reverb, you'll definitely want to check out the EarthQuaker Devices Afterneath v2 reverb pedal.

Plug your guitar in to the EarthQuaker Devices Afterneath v2 pedal, and you're ready to conjure everything from short room-like reverbs to endless swarms of ambience. The Length, Diffuse, and Dampen controls will be familiar to most tone tweakers, allowing you to adjust the decay time, delay spread, and tonal balance, respectively. The Drag control is similar to the delay time control on a delay pedal, allowing you to speed up or slow down the time between the individual delays that make up the reverb effect. And the Reflect control affects the regeneration of the effect signal, feeding the output back through the effect to create deeper, more dimensional sounds. Sweetwater guitarists can confirm that if you spend some time with the Afterneath v2, you're sure to find dozens of creative applications.

New switching system is soft, silent, and built for life

EarthQuaker redesigned a number of circuit boards to make way for its relay-based soft touch switching, and the benefits are many. For starters, since there's no hard click when you engage the pedal, the Afterneath v2 is more comfortable to play without shoes, and its switch is built to last a lifetime. And since there's no audible "pop", switching is completely discreet. Experience for yourself the best Afterneath yet: the EarthQuaker Devices Afterneath v2.

Hand-built by the pedal gurus at EarthQuaker Devices

EarthQuaker Devices is a small boutique guitar pedal company located in Akron, Ohio. Every EarthQuaker pedal you buy from Sweetwater was built by real human hands using premium components. EQD's pedals range from enhanced classics, like the Park Fuzz, to effects than no ear has heard before, like the Rainbow Machine. Whatever sound you're after, founder Jamie Stillman and his team of pedal gurus are dedicated to building a box to help you achieve it.

Note: the Afterneath v2 requires power. No signal will pass through the pedal without power.

Carve out cavernous tones for your guitar with the EarthQuaker Devices Afterneath v2 pedal!