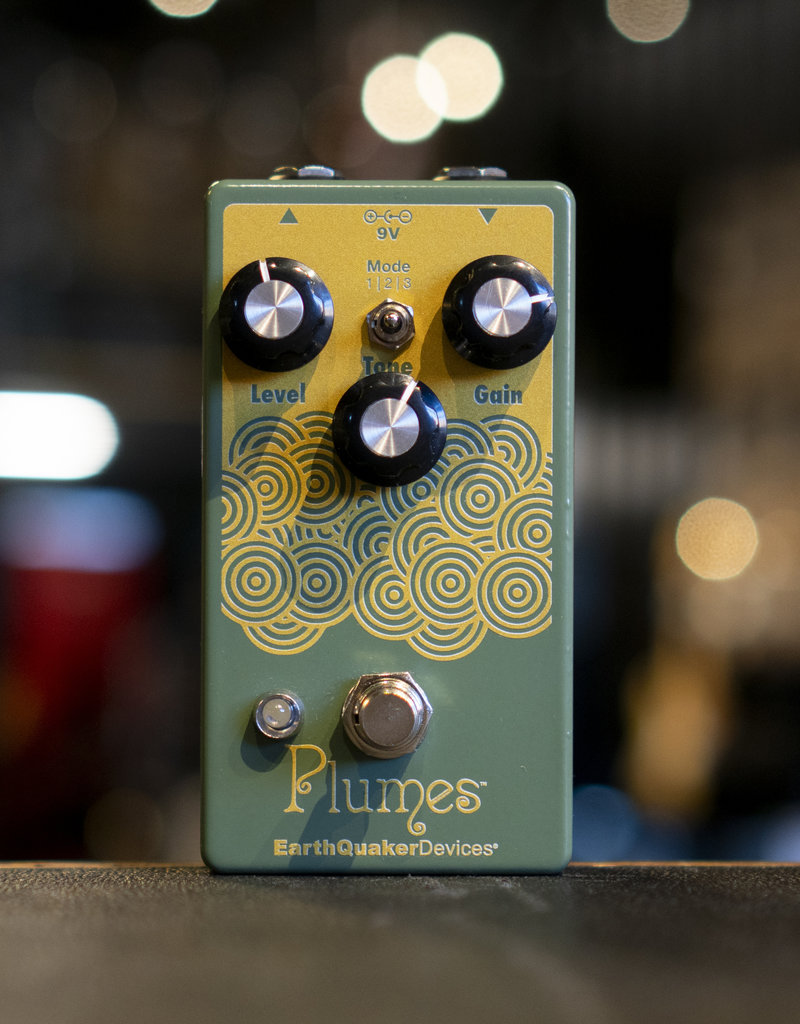 Ready to cook some tubes? Then put the EarthQuaker Devices Plumes between your guitar and amp. Armed with JFET op-amps, this high-headroom OD is chock-full of chime and clarity. Three different modes enable you to inject grind into your playing with symmetrical LED clipping, goose your amp with a wide-open op-amp clean boost, or give yourself a transparent dirty boost with asymmetrical silicon diode clipping. And once you dial in your clipping voice, you can mold it to perfection with a fine-tuned Tone control. What’s more, EarthQuaker Devices’ Flexi-Switch enables you to use momentary- and latching-style switching simultaneously. If you want your amp to sing with well-sculpted lows, focused mids, and ultra-clear highs, Plumes is your one-way ticket to tonal nirvana.

Plumes is green. It’s an overdrive. But it’s not another direct clone of the oft-duplicated pedal guitarists far and wide are familiar with — for many reasons. First of all, Plumes eschews the typical JRC4558 circuit and bipolar transistor buffers for JFET op-amps. It also raises the input impedance to nearly 10 megaohms. Plumes is powered by internally converting its 9-volt input to +/- 9 volts. All in all, Plumes offers lower noise and improved signal integrity over its predecessor, along with increased headroom, extra dimensionality, and added clarity. It also imparts a healthy dose of compression with truckloads of sustain.

One of the most versatile overdrives out there

Many overdrives are a one-trick pony, but not Plumes — its three clipping modes make it one of the most versatile OD stompboxes out there. Mode 1 offers symmetrical LED clipping, supplying you with loads of crunch and compression. This is a great setting for down-and-dirty rock ‘n’ roll tones. Mode 2 is a wide-open op-amp clean boost. This setting dispenses with the soft-clipping diodes altogether, leaving you with a straight op-amp drive that’s perfect for pushing your clean amp into restrained breakup. Mode 3 is an asymmetrical silicon diode arrangement that produces a familiar-sounding drive, but with more clarity and transparency. Plumes covers a lot of ground in a lot of situations; but when we ran it through its paces here at Sweetwater, we found that it works its best magic in front of a dirty amp.

A Tone knob that sounds great at any setting

On many overdrive pedals, only about 25% of the Tone knob’s range is useable. The rest produces either mud or ear-piercing high mids. Plumes takes this into account. Its fine-tuned Tone control is useful throughout its entire range. It’s like EarthQuaker Devices took the useable portion of the Tone knob on a typical overdrive and spread it over Plumes’ entire range. All the way counterclockwise, Plumes’ Tone control delivers clear, punchy lows without becoming boomy or muddy. All the way clockwise, the Tone knob adds brightness and clarity without shredding your ears.